Agricultural land use in Hawaii has been steadily declining, while our reliance upon imported food has been increasing. Following the closure of Maui’s last sugar plantation, there are even fewer croplands today because of the advent of large acreage land transactions and the increasingly common practice of converting agricultural lands into housing developments.

Since the beginning of the biotechnology industry, international chemical conglomerates have purchased and leased Hawaii’s prime agricultural land to test crops and develop seeds that are genetically engineered to withstand greater applications of pesticides.

A recent USDA report announced a measurable downturn in Hawaii’s pesticide-intensive seed industry, reporting a 17% decline in harvested acreage and a 13% decrease in the value from the previous season.

The GE seed industry in Hawaii has been experiencing a downturn for close to a decade. Hawaii seed exports are projected to total only 4.8 million pounds this year. That’s a 60% decline from the 12 million pounds exported in the 2009-2010 season.

Despite this slowdown, Hawaii still leads the country in the number of GE field trials, with 3,780 permits issued since the tests began in 1987. 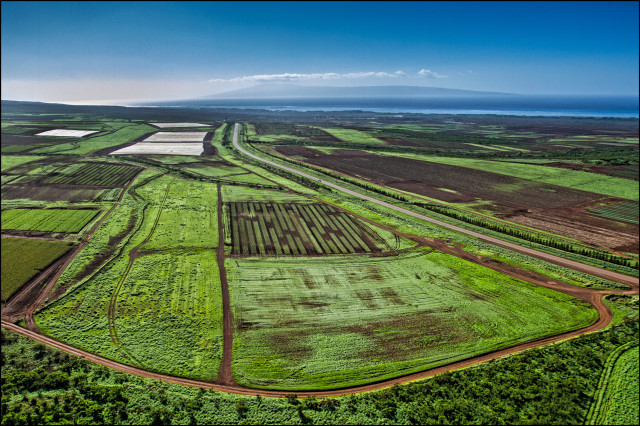 Monsanto fields on Molokai in 2014. The genetically engineered seed industry is on the decline.

Intense community pressure across the islands has pushed these operations to move away from sensitive areas. On Kauai, there is no longer an agrochemical field operation adjacent to Waimea Canyon Middle School, where more than one incident of pesticide drift caused students and teachers to evacuate. With the passage of last year’s groundbreaking law (Act 45), no entity is permitted to apply any restricted-use pesticides within 100 feet of a school in Hawaii.

As the footprint of Hawaii’s GE seed industry shrinks, valuable — and most importantly, irrigated — agricultural lands are being returned to state land-leasing agencies.

How can we rehabilitate these croplands from the intensive synthetic pesticide and fertilizer practices of their export-based predecessors? How can we transform them into successful agricultural operations that provide safe and stable jobs while growing nutritious foods for our local economy?

With the continued closure of seed operations, we must do everything we can to keep these agricultural lands producing food, as they were intended to. Hawaii must step up and unequivocally prioritize agriculture if we intend to meet our food security goals. When the budget for Hawaii’s Department of Agriculture amounts to less than 0.5% of the entire state budget, it is easy to see how the islands have become so food-insecure.

Hawaii’s state agencies once aggressively courted these multinational GE seed “life science” corporations. Today, they need to be just as aggressive, ambitious, and visionary in securing new tenants for these lands. We don’t merely need tenants that won’t repeat the mistakes of their corporate predecessors, but tenants who can be embraced by communities justifiably concerned about the legacy of pesticides left behind by the previous occupants.

We need bold and progressive policies that prioritize regenerative agriculture for local food consumption. If our state land-leasing agencies would invest in and incentivize soil remediation, we could restore these abused lands to the fertile, productive agriculture lands they once were.

How Hemp Can Help

Hawaii could follow the example of innovative farms like Hudson Hemp in Upstate New York, which successfully rehabilitated a former Syngenta agrochemical experiment site into an organic hemp farm. Hudson Hemp has taken advantage of hemp’s exceptional ability, with its long root system, to draw pesticides, pollutants, and heavy metals out of the soil.

“Soil restoration is the first step on our path to a healthy food system.”

The chemical companies have no interest in genetically engineering hemp for herbicide resistance because there are no registered pesticides for use on hemp crops yet. It may only be a matter of time before pesticide regulation catches up with hemp legalization.

Soil restoration is the first step on our path to a healthy food system. Unfortunately, the state of Hawaii chose to limit the regenerative potential of hemp this past legislative session when Gov. David Ige vetoed Hawaii’s hemp legalization bill.

This bill would have freed Hawaii’s hemp program from its current state of requiring research permits. It would have increased the number of farmers who could participate, the amount of acreage and funding to oversee the program.

With the future of Hawaii’s ag land in such a vulnerable position, it is hard to imagine that the state can afford to prevent farmers from growing this valuable, legal and restorative crop.

No matter how you feel about the GE crop debate, we can all agree that we want Hawaii to be food-secure. We all envision a thriving agricultural community that’s made up of diverse operations that provide safe and secure jobs as well as fresh food to locals.

As the GE seed industry in Hawaii continues to plummet, now is the time to come together and build something greater. We must find unity in our common vision to restore these long abused soils to the fertile, productive agriculture lands they once were. We must ensure that Hawaii is making savvy investments today that will establish a healthy and secure food system tomorrow.

The post Can The Seed Industry’s Decline Lead To A Sustainable Food System? appeared first on Honolulu Civil Beat.